Thomas Jefferson - Years in the Making

If there was a list of those who were years in the making Thomas Jefferson would be near the top. He certainly prepared himself well and rather continuously for the many significant things he accomplished in his life. 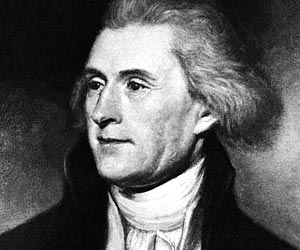 He was born into one of the early settlements of what would eventually become the state of Virginia.  Without schools conveniently available, his mother taught him to read and to love books  His sister taught him to play the violin.  Psychologists have now discovered that early development in music greatly improves learning ability.  He was eventually sent away to school where he studied Greek, Latin and French.  He became one of the best educated men in the 13 colonies being able to read Greek and Latin and having developed fine writing skills.

By the time he had graduated from college at William and Mary in Williamsburg, Virginia, he  realized how unfair it was to have a culture that sanctioned slavery.  He wanted to do something about it and at the same time to eliminate the excessive tax the English government had levied  upon the colonists.  A tax was levied on all things that were imported from England and even on things manufactured in the Colonies.  The people recognized Jefferson’s education and his desire to do something about their heavy tax burden. And elected him to political office–first to t he House of Burgesses and then to the Continental Congress.

With his determination to stand up for what he believed and with the organizing skills he had developed, he outlined his vision of a government empowered by the people.  Seeing his abilities and vision of a free America, the Continental Congress assigned Thomas Jefferson the task of writing a draft of a Declaration of Independence.

As the years passed, he was elected Governor of Virginia and to two terms as President of the United States of America.  His lessons taught by precept and example during his impressive lifetime are too numerous to mention, but here are a few of the very significant ones:

2.   Never trouble another about things you can do for yourself.

3.  Honesty is the first chapter in the Book of Wisdom.

4.  Whenever the people are well informed, they can be trusted to regulate their own  government.

5.  With all the imperfections of our present government, it is still without comparison  the best that has so far existed.

Thomas Jefferson was truly years in the making and that preparation gave him much wisdom which he shared with all that would listen.