YEARS IN THE MAKING 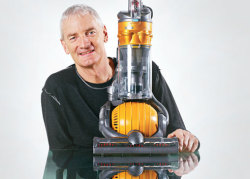 Perhaps you have not heard of James Dyson who is a very accomplished modern inventor.  One of the reasons for his relative lack of prominence is that one or more of his inventions made such an improvement on present day products that it greatly reduced sales of the current products.

James Dyson has continued to create, create, and create.  Among his other creations is a washing machine called the Contra Rotator which has two rotating drums  moving in opposite directions.  The machines are produced in bright colors instead of traditional white, black, or grey.

While following his inventive nature, he could see the need for students to be more creative so he established a foundation to support design and engineering education.  It encourages students to think differently and to experiment and to learn from mistakes instead of being afraid of them.

In a very practical gesture, he created an “Education box.”  It is filled with teaching aids for school activities. It contains a telescope, tools of all kinds.   His foundation pays for the boxes and loans them to schools for four weeks at a time without any charge to be used as training aids.  He has created a TV series featuring James Dyson himself that teaches students how to be more creative.

In addition to all this, the James Dyson Foundation  inspires young minds with the James Dyson Awards.  These are international design awards that celebrate, encourage and inspire the next generation of design engineers. It is open to graduates in the field of product design, industrial design and engineering.

James Dyson surely provides an inspiring example of years in the making.